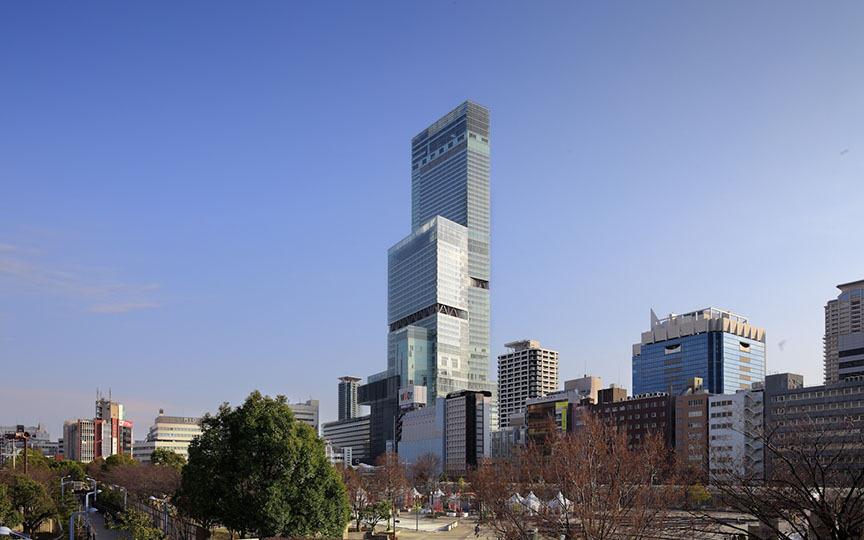 Abeno Harukas was designed to be a landmark in the Abeno area, which is the third largest hub after the Kita and Minami district. It’s a 300m tall multi-purpose commercial tower and is the tallest building in Japan (as of March 2016). We worked together with the American company, PCPA, and Takenaka construction firm to design the exterior. The existing department store in the lower portion (approx. 100, 000 m2 in area) has renovated both its exterior and interior, and the new design carries a sense of unity with the tower itself. The aim of this project was to design a building of approx. 200, 000 m2 in floor area to accommodate multiple functions such as department store, museum, offices, hotel, viewing deck and the Kintetsu station terminal. All these facilities are wrapped in the glass facade which is a symbolic element of the building as it appears to rise up and reach the sky. We placed a large number of plants to coordinate the building’s external portioned design, so between the volumes you can see greenery and even the viewing deck at the top is part of the green network, and the lower part has ceramic frit pattern on orange colored backboard giving it a commercial feel. At night, the multiple functions within the building are visible through the glass skin creating the image of a vertical city. Furthermore, when viewed from a plane landing at Itami airport, the tower is clearly visible and from the sky it can be seen as a landmark of Osaka, expressing the vertical city.