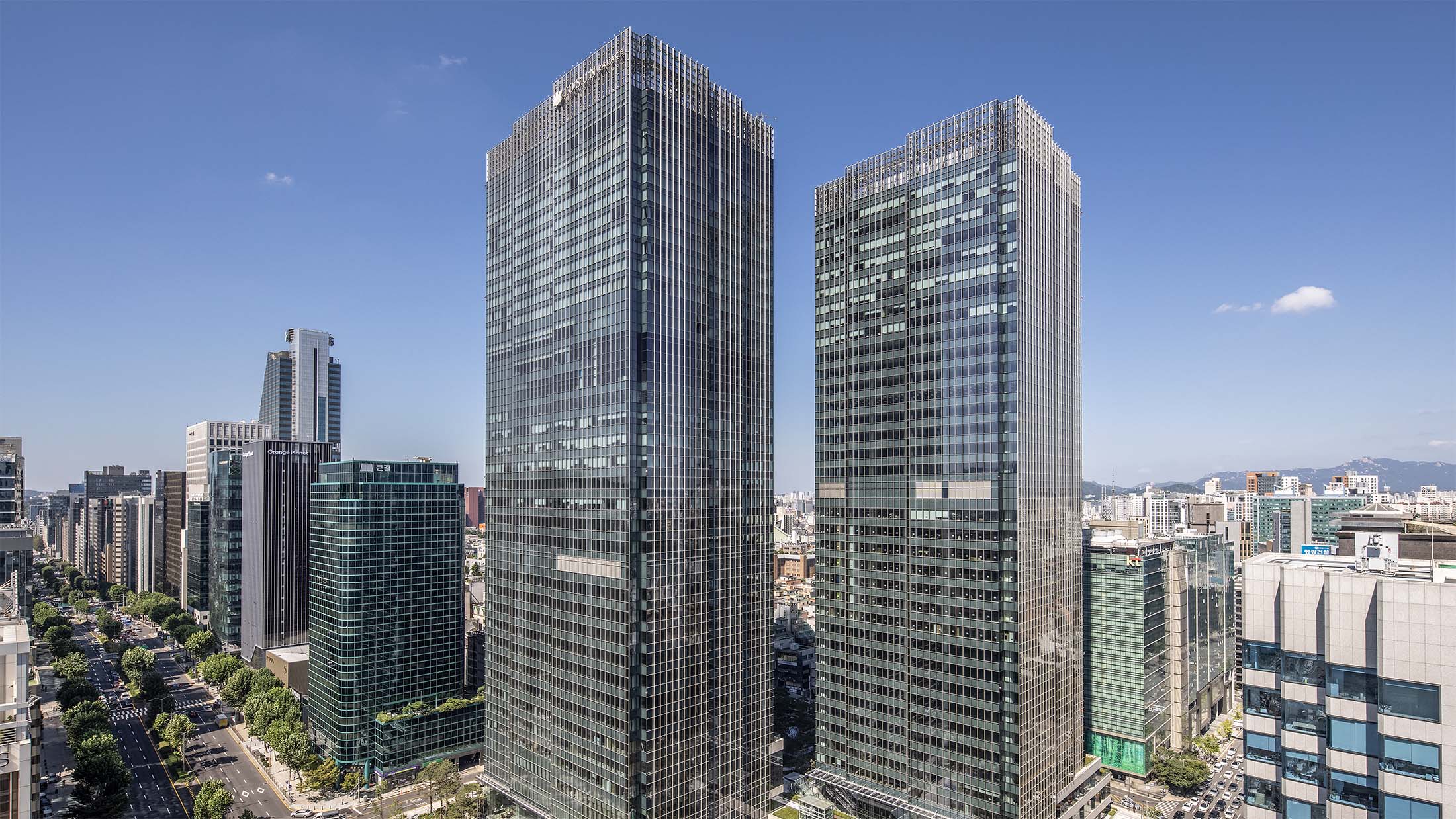 This project is for the property which faces Teheran Road in Gangnam District, one of the most prominent business and financial districts in Seoul. The beautiful Twin Towers, consisting of offices, hotels and city squares, are showing the presence as a new landmark in Seoul.
Many buildings that represent Korea have been built around the site, which is an area that has been remarkably developed in recent years. Before this development, the site had hotels and offices designed by Kim Swoo-geun, one of Korea’s leading architects. It is said that he came up with the exterior design with overlapping gentle curves and low-rise design in a staircase pattern through getting inspiration from the curves of tabi (kind of socks), one of Korean traditional costumes, and the eaves design of traditional Korean architecture.
Therefore, we actively incorporated Mr. Kim’s design concepts such as “layer overlapping, human scale” found in existing buildings into new architectural designs, and worked to realize “TIMELESS DESIGN” that connects the past, the present, and the future.

In this project we are planning two open spaces with different characteristics on the south and north sides of the site, referring to the historic garden layout of the Korean palace, Changdeokgung. Since a lively urban plaza space was located in front of Changdeokgung, and on the back was a garden space where people could spend quiet time assimilated with the natural topography of the mountain, we are carrying out the layout plan through interpreting that structure in a modern style. The ‘Urban Plaza’ facing Tehran Road on the south side is crowded with a lot of people throughout the year as a space to vitalize the city. A lush space of ‘Upper Garden’ on the north side, away from the hustle and bustle of the city, provides the people of the city center with relaxation and peace of mind.

The exterior is designed with the motif of the “waterfalls flowing down from the sky to the ground” that is seen in the Imperial Court painting called “Irworobongdo (the sun, the moon, and five mountains are painted)” that expresses Korean traditional thought. Each facade of the twin towers is divided into three sections, creating a delicate and beautiful design, with the three layers like overlapping waterfalls. The multiple vertical fins at the facade not only emphasize the vertical lines of the tower, but also show a delicate and rich expression like the glare of the waterfall, reflecting the sunlight that falls.

The low-rise part of the building and the landscape are likened to a garden where you can see waterfalls, and consist of a stepped terrace, a volume-segmented low-rise parts, and several horizontal canopies designed suitable to each point. By thoroughly implementing human-scale design combining those harmonious balances and detailed designs, a rich space where people can live comfortably has been realized while located in the city center.

In Seoul, South Korea, where many original designs are seen, we hope that CENTER FIELD with “TIMELESS DESIGN” that pursued a simple design and a beautiful silhouette born in the center of the city, will be a landmark loved for a long time just as its name suggests.